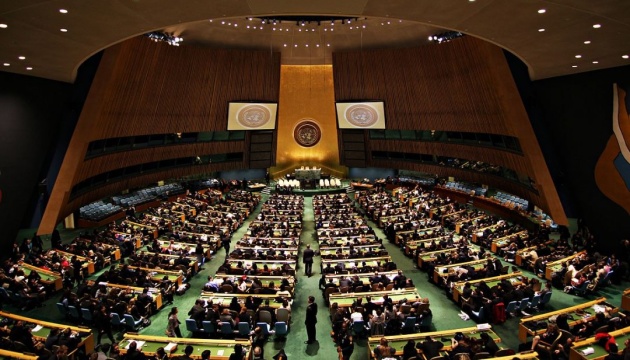 Today, in the framework of the renewed 11th extraordinary special session of the UN General Assembly on Ukraine, 140 states voted “FOR” the resolution “Humanitarian consequences of aggression against Ukraine”. The resolution clearly identifies the root cause of the humanitarian catastrophe and draws attention to urgently needed steps to alleviate humanitarian suffering on the ground.

By supporting this document, UN member states reaffirmed Russia’s sole responsibility for the humanitarian consequences of the aggression against Ukraine, and condemned the aggressor’s violation of international humanitarian law.

The approved document calls on Russia to immediately cease shelling of civilians and civilian infrastructure, to end the siege of cities and to ensure unhindered access for humanitarian personnel and the delivery of humanitarian aid.

The resolution calls for the protection of civilians leaving the war zone, including foreign nationals, including students, and for their safe and unhindered movement.

UN member states stressed the need to fully implement the UN General Assembly resolution of March 2, 2022 “Aggression against Ukraine”, and also tasked the UN Emergency Response Coordinator to prepare a report on the humanitarian situation in Ukraine.

The adopted resolution was the result of collective and thorough efforts of more than two dozen countries from all over the world, co-sponsored by 90 countries.

We are grateful for the full support of the UN member states for the General Assembly resolution, which has become an important part of the international toolkit for bringing Russia to justice.