The Ukrainian Investment Championship is a joint project of the Correspondent and DTEK, which is designed to reveal the investment attractiveness of each region of Ukraine.

Indeed, in a transforming economy, it is necessary to attract both domestic and international investors. The world is global and full of competition, including hands, heads and investments. And Ukraine is quite competitive in this competition. The championship was held to popularize not only Ukraine as a place to do business, but also each of its regions.

The role of regions as independent entities is growing rapidly in connection with the decentralization policy, which is pursued in Ukraine. The regions and their territorial units are granted broad rights and opportunities – including in the field of attracting investments.

Within the framework of the “Ukrainian Investment Championship” project, the results of the local authorities’ activities in stimulating investments and creating new jobs in the private sector were studied. The focus of the research turned out to be capital inflows, the emergence of new enterprises, the growth of salaries, as well as a number of other criteria.

Dnipropetrovsk region is a deeply industrial region, but with a well-developed agricultural sector.

Key industries are metallurgy, coal, iron and manganese ore mining, engineering (including defense and space industries). For example Yuzhnoye State Design Office, located in the city of Dnipror, is a world famous developer of rocket launchers. Pavlogradugol (DTEK) is the flagship of the Ukrainian coal industry; over its 14 years of operation, it has doubled its coal production. In 2018, Pavlogradugol provided nearly half of the total coal mined in Ukraine, and coal today is the basis of the country’s energy independence. Dnipropetrovsk region is one of the most urbanized – the population of such cities as Kryvyi Rih, Pavlohrad, Kamianske, Marhanets, Nikopol exceeds that one of many regional centers.

Dnipropetrovsk region has no land borders with other countries, but the region is one of the leaders in freight transportation by both road and railway transport. There is an international airport in the city of Dnipro, its passenger flow in 2018 reached 299 thousand people. (Boryspil – 12.6 mln people, Odessa – 1.6 mln people, Lviv – 1.45 mln people). The largest enterprise with foreign investment in the region is Arcelor Mital Kryvyi Rih, it is owned by Arcelor Mittal, a leader in world metallurgy.

Over the past two and a half years, the Marini Top Tower asphalt concrete plant, the Nikopol solar power plant with a capacity of 246 MW, has begun work in the region, and it is also planned to launch a project to build the Pavlohrad industrial park with an area of 250 ha(DTEK). With its help, local authorities want to attract $ 370 mln in investments into the region.

At the same time, the regional authorities are not actively using the development budget to stimulate investment in the region – 2019 it is only UAH 0.31 per capita.

In October 2018, Dnipropetrovsk Regional Council unveiled an updated investment passport of the region. The chairman of the regional council, Glib Prygunov, said that the document reflects the real economic picture in the region, and also promised that the data in it will be updated annually.

The greatest potential in the region remains for the development of heavy industry – electric power, coal mining, ore, for metallurgy, mechanical engineering, and the chemical industry. Most existing large enterprises will require additional investment and modernization – their owners are engaged in this quite actively. For example, DTEK has invested UAH 21 bln in Pavlogradugol since its privatization; it has doubled the production of anthracite from 10 to 20 million tons per year. The region is also attractive for agriculture and alternative energy. For example, DTEK Corporation began the construction of Pokrov solar power plant, which will be the most powerful in Ukraine.

And besides the development of heavy industry, the Dnipropetrovsk region has enormous potential for the development of businesses focused on the needs of the population, because there are a large number of solvent consumers. For example, we are talking about such businesses as the production of food products, household chemicals, clothing, shoes, furniture, household items, as well as the provision of various transport and household services, catering.

The detailed results of the “Investment Championship” and the rating of the Ukraine regions according to the results of 2018 can be found by the link. 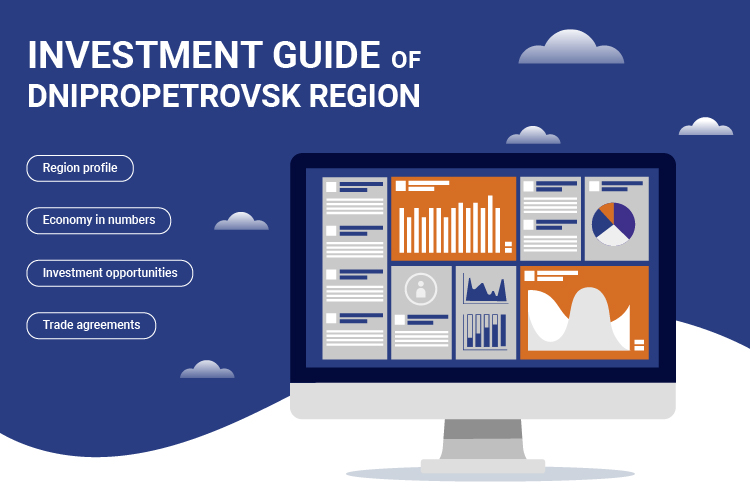 Search for business partners in a few seconds. How and where?